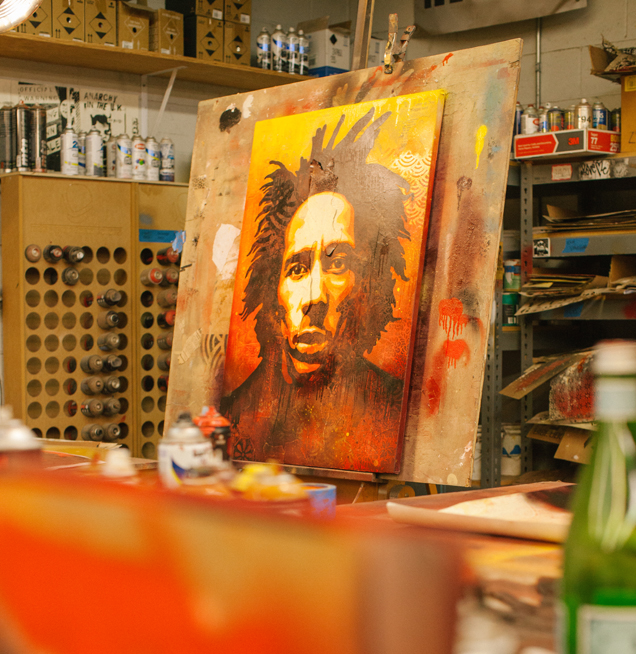 Bob Marley’s image has become almost as important a part of his legacy as his music—both are ubiquitous worldwide, and accordingly represent many people’s first exposure to Jamaican music and culture. Now, Bob Marley: Giant, an exhibit currently at the Known Gallery in L.A., aims to shed new light on the face that’s inspired so much more than just countless red, yellow, and green t-shirts.

Some of the most iconic images of Marley were captured by British photographer Dennis Morris, the primary focus of the exhibition. Morris began photographing Marley during his 1973 show at the Speakeasy Club in London, when he was only 16. From there, Marley invited him to join the Wailers for the rest of their tour, cementing a connection that would last for the rest of Marley’s life. The relationship was reciprocal—Morris’s Marley photos represented his first big break, landing his work on the cover of Time Out before he was 17, while Marley was able to cement his celebrity visually.

The collection on display includes 28 rarities and previously unreleased photos, as well as a limited-edition portrait by Shepard Fairey, the graphic artist behind the OBEY street art project and Obama’s 2008 “Hope” campaign posters. The print is inspired by one Morris‘s iconic images, with a pensive Marley redrawn in the strong warm red, orange, and yellow shading that has become Fairey’s signature.

Fairey, a music buff who often uses legendary artists as subjects, describes his longtime Marley fandom in his book OBEY: Supply and Demand:

I was excited to discover reggae, which even more boldly embodied many of the same elements of social protest as punk but in a way that was much more palatable to my parents. I think my parents bought me Bob Marley and the Wailers records for every Christmas or birthday until I had accumulated their entire catalog; my very conservative grandmother even bought me a Bob Marley shirt from Jamaica. I leaned more towards punk, but some punk bands, most notably Bad Brains, embraced both punk and reggae. Bob Marley’s music always cheered me up during my high-school years of personal struggle. I’m always inspired by how steadfast and positive Bob was.

Though just placed on sale yesterday morning, the original release of 450 prints ($80 each) on Fairey’s website ObeyGiant.com has already sold out.  Naturally you can find them on eBay… for four times the price.

Click through to see the final print, as well as a selection of Dennis Morris’s previously unreleased photos. Also, you can see more of Morris’s photos over at Rolling Stone—they’re celebrating Bob Marley with a collector’s issue this week.