Yesterday, we took a look at the life and times of unsung reggae veteran and former child dancehall star Yami Bolo, in the latest episode of LargeUp TV. Today, we delve further into Yami’s story with more from our interview, illustrated by classic images from Yami’s early days in the mid 1980s, from reggae documentarian, photographer and author, Beth Lesser.

On getting his start in music:

There was a lady called Miss Mac that used to have me and, when she died, she left some instruments for me — a trombone, a trumpet, and a flutina. The trumpet and the trombone were sold, but grandma always kept the flutina, up in the wardrobe for me. I’d always see the flutina at a certain time, growing up. I start[ed] to perform in church and in school, [and] I start to get a little following under the name of Yami. So we wanted to take it a little further. Where every night we would go to dance and ting. Anywhere the sound system deh, we’d haffi find it, whether mi haffi ride pon my bicycle or mi haffi walk to it. But I’d find the sound system just to get the mic. You’d have to fight your way to get to sing off the mic, too. Haffi strong! And if you’re strong enough, you will succeed. Some guys just push you out. Ah badness ting! You haffi kinda just [be] aggressive and intelligent at the same time. On his involvement with Sugar Minott’s Youthman Promotion sound system:

So it start when Nobby saw me on the sidewalk teaching some youths, and him ask me if mi can sing, and I tell him, Yeah, I just don’t know how fi get in the business. And him seh, Come link mi up at Sugar Minott’s. That’s how everything start. When mi enter inna Sugar Minott’s, and mi see di keyboard, di piano, di drum and everything, ah mi seh, My place dis. And mi nuh go back home fi a long while. Sugar, mi deh! It become my new yard, my new house. Sleeping on sound boxes, and just… my yaad. Fulljoy di ting as a youth. This was 1 Robert Crescent, Kingston 5 – Youthman Promotion headquarters.

I never leave there, I just branched out. Because wherever you are, you are a part of Youthman Promotion. [It] was a large organization that only needed some more money. The financial reservoir was always suffering from a touch of drought. A lot of youth came through there. 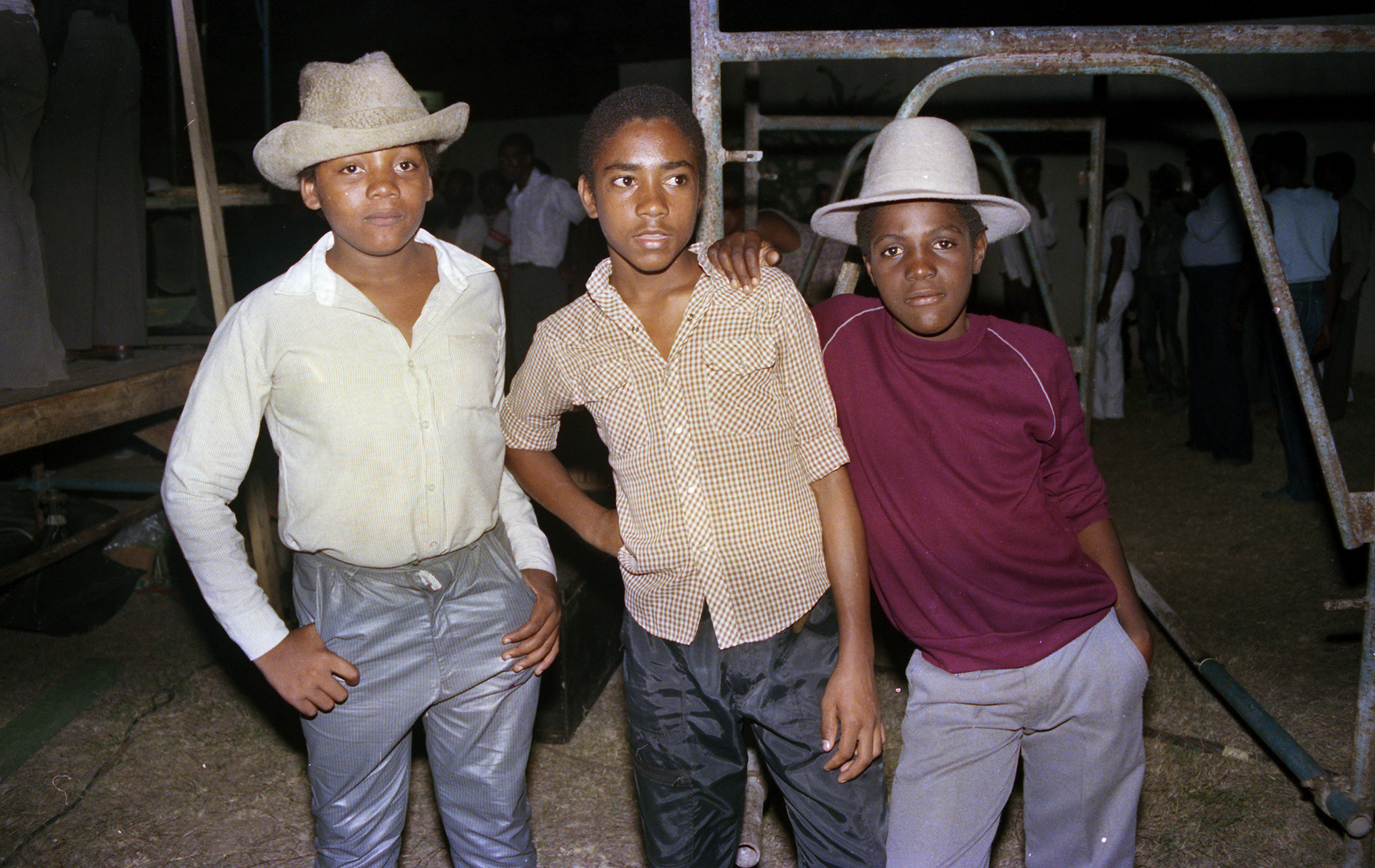 On his peers from dancehall’s mid ’80s youth crew:

Little Kirk, Beenie Man, Little Devon, Little Chukie, White Mice, who was our brother, sidekick — I think we are all in that [same] age. They were all dancehall douens, who still ah work. We all interact and hold ah vibes, even til today. When I was in Jamaica I spoke with Beenie Man. I spoke to White Mice the other day. We ha[d] a energy when we was a likkle youth. Coming up, you always have to challenge to make it. From time to time we’d have a likkle clash, deejay and deejay clash, singer and singer clash. And you go seh, ‘Yo, my singer badder than your singer deh.” When each one of us sing, some people would like it more and some other group would love it more. I [found] out that it can create problems, jealousy and even fight can bruk out, so mi kinda tek weh myself from that mentality and try to find out how we can preserve the refined, priceless diamond called reggae, or Jah music.

Living in the corporate area of Kingston 13, from time to time I would find myself in all the garrison[s]. I deem it necessary that I must not take side with no political party but I must have friends on both sides. So I would go and make friends with all of my people, my bredrin dem. I would go through some place where normal people wouldn’t even think fi go round deh. And mek mi voice be known, that Yami is building this ting. On his debut single and first hit, “When A Man’s In Love”:

“When A Man’s In Love” was my friend’s song, Vincent Stewart. We called him Jolly Stewart. He knew everything about the business. I was singing but I never have a song ready yet. When the opportunity came, Winston Riley was actually recording my friend Tenor Saw. Tenor Saw kn[e]w that I can sing. [I was] in the sound system, singing crazy stuff. Sometime I might not be singing the right lyrics, but just the sound and the vibes and the tenacity of the approach, a crowd of people love it.

Winston Riley give me the time to really sing. I remember the song in my head, “Gotta take it easy,” but [I thought] I gotta incorporate some other ting inna it. At that time “Stanna-nichy-woy” was a fresh song from Junior Reid that never touch the road yet. So I kind of incorporate[d] the Ning-Ning-Woy into “When A Man’s In Love.”

I realized the magic of Yami, incorporating these elements from my friend and these elements I put in it. Riley was telling me, “It’s a cover song, it’s ‘When a Man Loves a Woman.’ I said, “No, this one is ‘When A Man’s In Love.’” Got-ta, take it easy – this is an original now! I think my young voice have something to do with it, because the note I was singing, not knowing, was like a young Michael Jackson. On the “Waterhouse Style” and finding his own sound:

I’m from Kingston 13, part of the corporate area. The style that we have now, which is the ning-ning-woyyy, ta-na-nee, ta-na-nee, ta-na-nee-tee-woyyy, ti-ni-ning-ning-noyyy — that style deh — it come from Waterhouse. We had Don Carlos, who is still using that style; Mykal Rose, who is one of the great founders of that style; we have Junior Reid, who is the big man who run the style and own the style. To have a little separation, we ask Jah fi give wi a sound, which was the Ay-ya-yee. So with the Ay-ya-yee, we can know that Yami seh dat. With the same energy. At the time, I look up to Junior Reid, he is one of my mentors. I also look up to Mykal Rose, one of my great mentors, and also Don Carlos. There is a love of the style and I have a love of these artists who inspire me, too. However, I have to continue to develop a Yami energy. The people call it the Waterhouse style still. On his time with Augustus Pablo and Rockers International:

As a little child growing up in the ghetto, I used to hear the sound of Pablo. I didn’t meet him those times yet. I entered into the music business through Sugar Minott, where it all started from. There, too, Pablo used to come and visit. Meeting up with Junior Delgado, we became bredren, and Augustus Pablo was his bredrin. We started to live together, me, Delgado and White Mice, and tour together, like a band. Under the name Rockers International band, which Pablo had already established. We, as young yutes, were very happy to meet the master, the legend, who taught us the business. Like how to produce music, sell our records, and protect our publishing, and our rights. Pablo taught us to make music, and he gave me my first piano and really allowed me to learn around him, arranging and producing music, playing percussion. Just getting involved. I was happy to sign to the label because we were getting the opportunity to learn how to create organic music, Rockers music, real reggae music, the substance of what is needed to keep the music flourishing. Our teacher, the great Augustus Pablo, is the one whose energy affected us while on tour and while living together. You kind of hear the technique by living with him daily, and kinda feel it. And based upon the love he had bestowed on us the act of giving us a keyboard. Like Gregory Isaacs,gave me my first studio board. You have certain bredrin in the music business. Pablo, by giving me that keyboard, I take it seriously. He’s giving you some knowledge, you have to grasp it.

The melodica is just like playing the piano. And once you know the piano, and you know your scales, it’s easy. The difference, when we play it now in Rasta movements, it’s a different celestial sound. If dem want [to] learn how to play it, I think they should visit the great Augustus Pablo catalog so they understand how to really master this instrument. It comes from elements of His Imperial Majesty, within the music.

I can never be Pablo, and I will never try to do that. But I will always incorporate the melodica in our performance as one of the instruments that we have learned along the way. Coming from Sugar Minott, Junior Delgado, Winston Riley, Tappa Zukie, Jammy’s, the Marleys, everyone that we meet we incorporate something into our music, to keep growing.