The Boiling Lake sounds like a mythical place where an expendable character from, say, Game of Thrones or Lord of the Rings might be tossed to their doom. In fact, there are two places in the world where one can encounter a real-life boiling lake — massive hot springs where water literally roils like a giant pot. One is located, quite appropriately, in New Zealand. The other is on the island of Dominica, in the Eastern Caribbean, a hotbed for volcanic activity and exceptional hiking.

Scientifically speaking, Dominica’s Boiling Lake is a flooded fumarole, an opening in the Earth’s crust near or above a volcano — in this case Morne Watt, or Rat Mountain, one of nine active craters on the Nature Island. Steam and gases escaping from molten lava below bubble up to the surface, creating a perpetual boil near the center of the 200-foot-wide lake. Water temperatures typically are over 200 degrees Fahrenheit.

The Boiling Lake Trail is the most popular hike on an island known for its eco- and adventure tourism, and one of the most legendary hikes in the Caribbean. Still, only a small percent of visitors to Dominica actually make the trip through Morne Trois Piton National Park to the lake. That’s partly because getting there involves a rigorous eight-mile trek, which can take from morning until night, especially if you wish to stop and enjoy the scenery, or document your trip with photos.

We recommend finding the time. The hike takes you not only to one of the Caribbean’s most unique sites, but also through lush rainforest, past natural jacuzzis, and into a place called the Valley of Desolation, where one can stop to boil eggs in the steaming geysers which spew up through the ground.

While visiting Dominica for the annual World Creole Music Festival in Roseau, we connected with Elvis Stedman, a guide from Laudat, the nearest town to Morne Trois Piton and the Boiling Lake. Elvis has been visiting the lake his whole life, and knows the trail better than almost anyone. “The first time, I was a little over seven years and I came here with my uncle and a St. Lucian,” Elvis told us as we arrived at the Boiling Lake. “That day it was pouring rain and I remember I had to hold onto my uncle’s feet to get across some of the streams. And since then I’ve been here regularly — well over 200 times.”

An expert botanist, Elvis has an encyclopedic knowledge of Dominica’s plant life, which he shared as we made our way along the trail. The rich and colorful fauna includes ferns which release tattoo-like inks through the spores of its leaves, and the richeria grandis tree, whose bark, commonly known as bois bandé (“hard and erect”), is consumed as an aphrodisiac (Or, as Elvis says, “in order to keep going like the Energizer Bunny.”) He also showed us wild herbs and plants with various medicinal uses, and swung like Tarzan from sturdy aerial roots hanging from the massive, primeval chataignier trees abundant in the park.

Arrival at the Boiling Lake brings a sort of state of euphoria. There’s both relief to be at the end of an exhausting trek (or at least half-way through it — the only way out is to do the whole thing over in reverse) and awe at witnessing something so rare, beautiful and unusual. From a ledge about 100 feet above, one can observe the Boiling Lake as it emerges, and then disappears, through the dense clouds of steam created by the bubbling below. To catch a clear shot of the lake bubbling like a cauldron, things must be timed just right.

This is definitely one hike not to be missed. If you ever find yourself in Dominica with a full day to spare, check the weather report, make arrangements with a local guide like Elvis, and experience one of the true wonders of the Caribbean. Elvis demonstrates how to apply a temporary tattoo from the leaves of a fern found in the park. At more than 3,000 feet above sea level, you can catch a clear view out to where the Caribbean Sea meets the Atlantic Ocean. 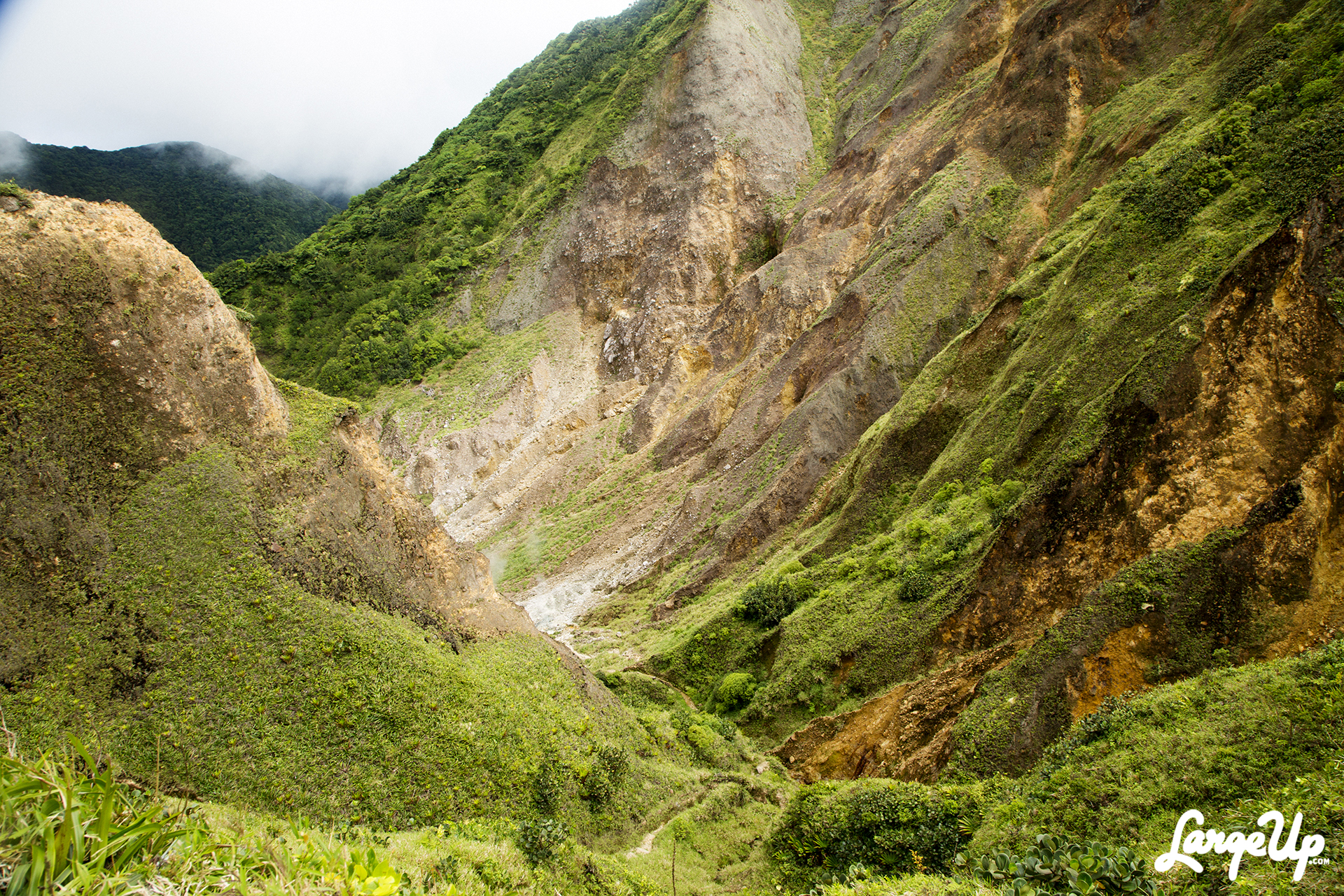 As you descend towards the Boiling Lake from the hike’s highest points, you will find terrain that looks like nothing else in the Caribbean — the result of volcanic activity in this part of Dominica thousands of years ago. (The island has seen no major eruptions in modern times, despite the presence of nine active volcanoes). While strenuous, the Boiling Lake Trail is manageable for hikers of many ages, so long as you have a local guide. Here, a mother/daughter duo from Canada — one a novice, the other an experienced hiker — stop for a moment on their way back from the Lake. A view into the otherworldly Valley of Desolation. Elvis plots a course through the Valley of Desolation. The smoke seen here is steam and gases emanating from the molten lava below the surface, coming up through vents in the ground. A sulphur spring near the edge of the Boiling Lake Trail. Unlike the Boiling Lake itself, the temperatures in this water are just right for a soothing bath. Just don’t stay too long, or your legs might start to feel a bit like jelly on the next leg of the hike. Hikers after a mud bath in one of the Boiling Lake Trail’s sulphur springs. Elvis has hiked the Boiling Lake Trail well over 200 times, he estimates. You can find him online at Boiling Lake Tours, or just ask around for Elvis in the hillside towns above Roseau. A view of the Boiling Lake, from a ledge 100 feet above — the closest safe vantage point to this surreal, and dangerous, phenomenon. A fall would almost certainly result in death, so be careful out there. A closer look at the roiling swirl at the center of the Boiling Lake.