This story is part of an ongoing series highlighting life and culture in Guyana, the “Land of Many Rivers.”

The sight of the winding Potaro River, emerging snake-like from the cover of the Amazon forest, and plunging 741 feet into a seeming infinity of ravines, is one of the more arresting scenes you can see in life.

If you are ever lucky enough to board a flight to Kaieteur Falls, Guyana’s top-ranking attraction and the world’s largest single-drop waterfall, you’ll witness it unfold below your airplane window — and you’ll have plenty of time to photograph that moment. The pilots who fly the Kaieteur route from Georgetown’s Ogle Airport make a practice of circling the falls overhead, on arrival and departure, ensuring every traveler gets their shot.

Located in a pristine stretch of Guyana’s rugged, largely uninhabited interior, hundreds of miles from any sizable town or road, Kaieteur is a quick, one-hour flight from Georgetown. However, making the arrangements to get there can require some patience. Weight management is a crucial consideration when flying 12-seat aircraft into remote jungle terrain. Flights are cancelled when not fully booked, and passengers are bumped when weights don’t add up. Tourists have come across the world to visit Kaieteur only to leave Guyana without seeing it.

Perpetually shrouded in fog from the 23,400 cubic feet of water flowing through it every second, the falls are considered a sacred site by the local Patamona people, one of the nine Amerindian tribes which call Guyana home. It wasn’t until 1870 that the first European reached Kaieteur. This late “discovery” may explain why Kaieteur remains one of the most unspoiled tourist attractions of its magnitude. There’s no railings, no souvenir shops, and the limited access means there’s never a crowd.

Kaieteur National Park was established in 1929 by the British commonwealth, ensuring that the area around the falls would be protected from mining and logging. In 1999, the park was expanded to its current size of 62,600 hectares (242 square miles) by then-president Cheddi Jagan. The dirt landing strip near the falls was also paved around this time.

Kaieteur is accessible through overland travel — tour operator Rainforest Tours offers a five-day trip from Georgetown for $900. It takes about three days to get there, by road and then canoe, concluding with a steep, three-hour hike to the top of the falls. But the majority of tourists arrive via chartered flights. Day tours from Ogle are frequently packaged with trips to Orinduik Falls, on the border with Brazil. These tours, which typically leave in the late morning or early afternoon and return before sundown, keep a brisk pace, leaving little time to stop and take in the mystical vibe. (Any other word comes up short in describing the vibe on the ground at Kaieteur.) For those who prefer a more customized experience, rooms at Kaieteur’s small guesthouse can be rented overnight with a cash deposit at the Kaieteur National Park office in Georgetown. Be warned: they are far from luxurious.

Last spring, during Guyana’s 50th anniversary celebrations, LargeUp caught a flight to Kaieteur with Capt. Paul Piteloud of Air Services Ltd. Our fellow travelers included a handful of Americans; one German backpacker, and several Guyanese visiting their country’s most iconic landmark for the first time. Here’s what we saw. 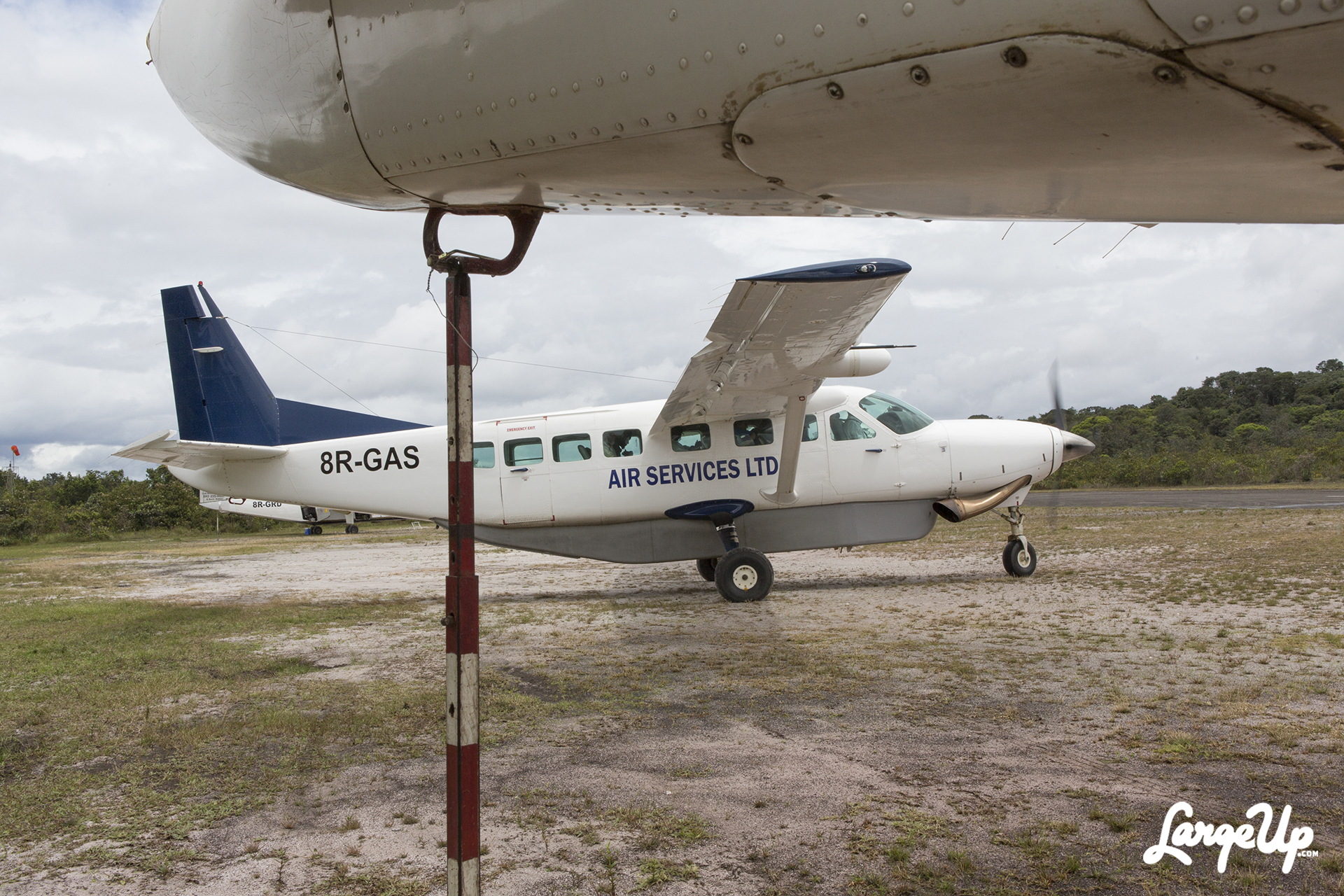 Travelers can book flights to Kaieteur directly through the handful of airlines offering regular trips to the falls, or tour operators such as Rainforest Tours, Wilderness Explorers and Adventure Guianas. Air Services Ltd. offers trips to Kaieteur for $145, on Tuesdays, Thursdays, Saturdays and Sundays. Further information can be found on the Guyana Tourism website. Capt. Paul Piteloud, of Quebec, Canada, and his aircraft, after a safe landing. Leave the bug spray at home? These carnivorous sundew (drosera) plants, which sprout through limestone near the falls, are one of nature’s best insect repellents. They seemed to do their job: We encountered no mosquitoes, even on a muggy, rainy-season afternoon. A sign pointing to Johnson’s View, one of three currently accessible vantage points from which to view the falls. Guide Thomas Williams makes the daily trek to Kaieteur National Park from Chenapau, a Patamona village 25 kilometers from the falls, and one of the only permanent settlement in Guyana’s Potaro-Siparuni region. And there it is. A stunning view of Kaieteur emerging from the plateau. It’s a lonely life: The golden frog spends its entire existence within pools of water collected by the tank bromeliad plant, seen here. Spotting these tiny amphibians, who are only found here in the Kaieteur Plateau, is a popular pastime of visitors to the falls. This stretch of the Amazon River basin has some of the world’s greatest biodiversity, with many unique, endemic species just like this one. A red plant cuts a psychedelic figure along one of the paths to the falls. A closer look at the falls. Sadly, access to the ledge nearest to the falls has been closed off on account of several recent suicides. After making their way down the falls, waters from the Potaro cascade through several gorges before joining up with the mighty Essequibo River. Another view of the Kaieteur gorge, with the tepui plateaus of the Pakaraima mountain range in the distance. Several legends surround the naming of the falls. According to one, Kaieteur was named for a Patamona chief who acted to save his people by paddling over the falls in an act of self-sacrifice. Another purports the name comes from an incident in which an old man was pushed over the falls to his death by his family. Chenapau’s Anthony Melville, a former tribal chief, says Kaieteur is known to the Patamona as Kayik Tuwak, meaning “Old Man Falls.” “Not ‘Kaieteur Falls,’” he says. “We don’t know anything by that name.” Thomas outside the Kaieteur guest house. Day trips generally offer a brief, two-hour window to explore the falls. It’s not enough time. Those who wish to explore the area at their own pace, or witness the sunset spectacle when thousands of swallows dash into the canyon behind the falls, can book an overnight stay in one of two rooms. And one last shot. This photo was taken as the plane looped over the falls after departure. Keep it locked on LargeUp for our next stop in Guyana: Orinduik Falls.